What's on your work desk Wednesday 61 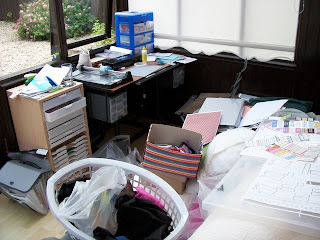 Wednedsday again and I haven't posted since last Wednesday, oh dear I'm slipping! Despite having two days off work Monday and Tuesday I still don't seem to have done all that much crafting. I have been concentrating mainly though on a mini book for my Dad for his 70th and have completed six pages of that so I suppose that counts as at least six cards! It's not quite finished yet but I promise to share it when it is. It's the first scrapbook type thing that I've ever made, so not as professional looking as some I have seen, but hopefully he will like it.

My craft space is getting messier by the day, it really needs a tidy up I think! 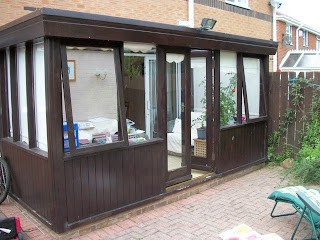 I've taken a picture of the conservatory from the outside as a few people last week weren't familiar with the English love of these constructions! Ours is not a posh UPVC one though which the majoirity are, it is basically a wooden shack with windows, ha ha! For those of you who were concerned about me overheating last week, my 'air conditioning' consists of opening the doors and the windows which actually works pretty well thank goodness! I usually open them half an hour or so before I go in so it's cooled down ready to start crafting.

The shot through the window of the conservatory shows my promarker storage which consists of a box my hair straighteners came in! 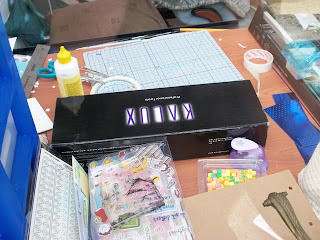 If you are wondering what all this is about, visit Julia's blog at the Stamping Ground by clicking the WOYWW badge on the right of my blog.

Back to work this morning so I had best go and get ready, never mind soon be the weekend again! (What did my Mother say about not wishing my life away...)
WOYWW

Hi, please say hello and leave me a comment about my designs, always happy to welcome new friends :-)

Popular posts from this blog 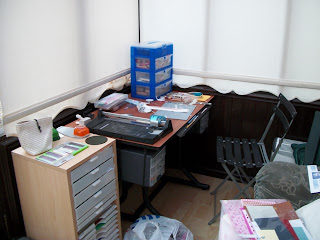 Not much going on this week really apart from some untidiness around the sofa area, I really need to have a tidy up! There are quite a few sequins everwhere (although you probably can't see them!) as I emptied out some that I got in my car boot sale haul last week. I didn't actually use any, just emptied them out all over! I've had to pull the blinds down on the windows as my desk was getting too hot, don't worry though I always open them to craft so I can see the garden.

I still seem to be struggling to find time to do much crafting at the mo. Managed to finish the 30th Birthday card that was in progress last week (see below). I'm having Monday and Tuesday off work next week to have a bit of a rest so I have to get some crafting done then. It's my Dad's 70th birthday in a couple of weeks so I need to sort out a special card for that and also yet another card for someone at work (leavers card this time)

I'm sharing the conservatory at the moment wit…
Read more 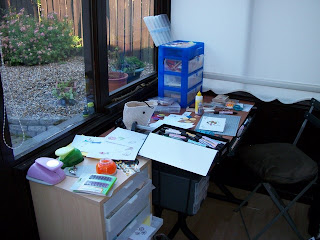 Wednesday again, how quickly it comes round! This week I have been mainly colouring as I have been stocking up on Promarkers. (Cowling and Wilcox are selling the packs of 5 half price till 22nd August, I've just ordered another 3 packs on top of the 2 they have already sent me!) I really need to have a lesson on using them though as I was never an artist and am tending to just colour in more or less solid blocks, so could do with a lesson on light and shading!

Yes, that is also a Christmas card you can see on my desk! There were so many very organised bloggers I had seen that I was shamed into making a start! There were quite a few Christmassy bits in the haul of stash I got from the car boot sale the other week, so I emptied them all out and had a play. I'll show you the snowman card again when it is finished! The only slight problem is I can't find where I have hidden all my Christmas stamps from last year, any ideas?! There was a Professor of Findology on BBC bre…
Read more 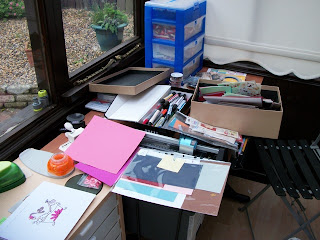 Can't believe it is Wednesday yet again! Lots going on on my somewhat messy desk this week! I've had a bit of a bargain haul from one of the local car boot sales, still going through it all and finding out what I've got! Hubby goes round the car boot sales on a regular basis to help feed the ebay empire. I was just relaxing on Sunday when he called to say there was a lady selling craft stuff for 20p per item so I thought I'd go and have a look. I got quite a few bits and pieces (mainly papers and ribbon, plus some rather funky sequins you can just about see in the top right of the photo) from her. I also had a wander about and found another lady selling a box crammed with craft stuff for £5! I managed to get her down to £4 and it was definitely worth it, it was crammed with card, paper, gems, ribbon, stamps, stickers, the lot! The box is in the second photo, I've taken the ribbon and gems out now but the papers and card are still all in there.

Alisonw30
Redcar, United Kingdom
I'm 39 years old, married and live in Redcar, Cleveland with my hubby. I've been making cards for about a year now and find it such a relaxing and absorbing interest. I also enjoy spending too much money on paper, pens and equipment :-) I'm hoping to make lots of like minded crafting friends so please feel free to leave me a comment or to follow me (I could do with a few more ;-)